COVID-19 UPDATE: Your safety is our priority. Read more... 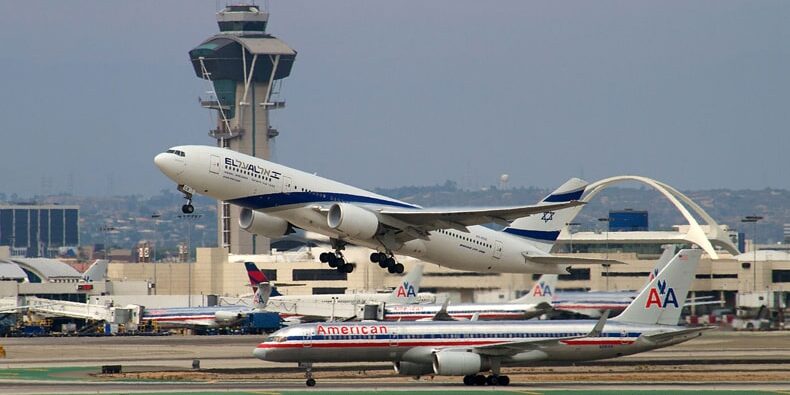 Get to Know LAX

Los Angeles International Airport, often referred to by its avionic call sign, LAX, is the largest airport in California and one of the largest airports in the world. Known as much for its myriad of stores, restaurants, and facilities as for its transportation, for many, LAX has become a sightseeing destination in and of itself. It is a right of passage for both tourists and native Los Angelenos to experience.

Located just 15 miles from Los Angeles, LAX serves as the gateway to the Pacific Rim and Asia for outgoing air traffic, while incoming traffic uses it as a cargo and tourist hub to the western United States. In 2015, LAX moved more than seventy-four million passengers and over two million tons of cargo through its runways. A vast network of transportation options, everything from State Van Rental’s Los Angeles van rental location to taxis, buses and metro trains, exist to move people and cargo effectively and safely between the two—but it was not always this way.

In this guide, we’ll explore everything from the history of Los Angeles International to how to get to LAX airport so that you’ll have all the information you need when traveling to one of the most exciting cities in the world.

LAX began humbly as a parcel of land granted by the Governor of Alta California, Juan Alvarado, to Antonio Ygnacio Avila. Along with land owned by his brother, the Avila family controlled over twenty-five thousand acres of land from the sea to a point near the Los Angeles city limits. This land would change hands several times over the years, providing pasture for sheep, then, eventually, fields of barley, lima beans, and wheat. That may have been the end of the story were it not for the advent of the flying machine.

A group of area aviators in the 1920’s saw the potential of one of these fields as a makeshift airstrip. The aircraft of the time were designed to land and take off from rough ground, making a fallow field, close to a major city yet far enough away to avoid complaints, perfect for their needs. Their aerial exploits soon drew the attention of local gawkers who would come out to marvel at the spectacle. While local citizens began to push for a proper airfield, the city of Los Angeles, recognizing the financial boons it would bring, turned their attention toward a municipal airport to serve Southern California’s burgeoning transportation needs. Real estate agent William Mines, whose name would be given to LAX’s precursor, offered six-hundred forty acres in 1928, which the city agreed to lease for ten years.

The next year, historic Hangar Number 1 became the first building erected on Mines Airfield. In 1937, as the Great Depression neared its end, to facilitate airport improvements, Los Angeles bought airport outright to aid funding. Expansion was put on hold, as, soon after, it became an important military hub to the Pacific Theater during World War II. It was not until 1946 that commercial flights began in earnest as the major airlines moved a majority of their air traffic operations to LAX from Burbank’s Union Terminal (now The Bob Hope Hollywood Burbank Airport).

LAX has continued to expand, renovating and reimagining itself continuously. The airport now comprises four runways of up to twelve-thousand ninety feet, nine terminals, and the support facilities to service hundreds of flights every day of the year.

How To Get To LAX Airport

From downtown Los Angeles, take Interstate 110 south toward San Pedro. Follow the ramp on the right onto Interstate 105 West, Take exit 1C toward CA-1 North and follow the road signs right into LAX

From San Diego, take Interstate 5 North. At exit 85A, take the ramp to CA-73 North to Interstate 405 North toward Long Beach. Interstate 405 will take you to Interstate 105 West. From 105 West, you’ll use exit 1C to get onto CA-1 North and follow the road signs to the airport.

Things to do at LAX

Now that you know how to get to LAX airport, you can relax and explore the dozens of restaurants and stores on the airport grounds, several pet parks for furry friends to stretch all four legs, and experiences designed to keep the whole family engaged.

Throughout the facility, you will find restaurants to suit the entire family or the most cultured palate. Many popular chains, such as Kentucky Fried Chicken and Peet’s Coffee, are available, as well as local favorites, like Monsieur Marcel Gourmet Market and Restaurant. If you prefer something to whet your whistle, Angel City Brewery’s Baltic Porter can quench your thirst, or you could head over to one of Rock’s Brews two locations for some suds and songs.

For shopping, LAX offers the convenience of a full mall. Settle down with a new bestseller from one of the many bookstores while you wait for your flight, or visit one of the news stands for the latest in breaking news. Designer boutiques, such as Michael Kors and Hugo Boss, offer the chance to find that special gift for a special someone. Kids will enjoy the Mattel Experience, and Magic Johnson Sports will give them the Los Angeles sports souvenir they have been looking for.

While at LAX, be sure to visit the Flight Path Learning Center and Museum. Located inside the Imperial Terminal, this hands-on learning opportunity has plenty of hands-on experiences for both young and old, and admission is free!. Complete with photographs and models from the earliest days of Mines Airfield, the museum offers a look at Southern California’s aviation history as it has progressed through the years, its importance in the development of the unique regional culture, and the role it will play moving forward. Many of the signature pieces are on loan from private collections and have never before been seen.

If your layover gets extended or you would rather catch some shut-eye after a late flight, dozens of hotels are available to let you get a good night’s sleep. Many offer shuttle service directly to and from the airport. Hotels in the Gateway to LA network also provide Ocean Express Trolley service to nearby attractions. Whatever your budget, there’s a bed nearby.

In fact, many tourists choose to make one of the nearby airports their home away from home for the duration of the trip. Business travelers often choose to stay nearby as this keeps them close to the airport with its wide range of amenities. It also serves as a familiar landmark that is easy for them to find their way back Whatever the purpose of your trip, the central location makes an LAX area hotel convenient.

What to do Near LAX

LAX is Southern California’s tourism hub, so it makes sense that there are plenty of area attractions within a short drive. Head to State Van Rental’s Los Angeles van rental location and hit the road for some fun.

If classic American automotive excellence gets your motor running, The Automobile Driving Museum offers a rotating collection of over 150 classic and vintage automobiles. It includes vehicles ranging from the 121 year-old Benz Motorwagon to a true one of a kind ’99 Nissan 350Z. For a real treat, visit on Sunday to experience a passenger ride in a car from their collection.

Plane spotting is a quintessential part of the LAX experience. The In and Out Burger at 9149 S. Sepulveda Blvd., Westchester, is famous for more than just the food. Located directly under the final approach for runways 24 L and R, it offers a spectacular view of the passenger jets screaming by overhead while eating burgers and fries.

After your meal, head over to Abbot Kinney Boulevard in Venice, for a unique shopping treat. Abbot Kinney offers a full mile of art, clothes, and dining unlike anything else. There is a mixture of both vintage and modern, all with a flair particular to the area. From the G2 gallery which showcases the world’s best nature and wildlife photographers (with proceeds going to environmental causes) to Aviator Nation, a homegrown California lifestyle clothing brand, there is something for the everyone.

For a more upscale shopping trip, Santa Monica Place is located a mere twenty minutes from the airport. Offering luxury shopping on the beach, you will find the trendiest shops ready to fulfill your retail needs in an open-air mall with a fresh feel. Bloomingdales, Barneys of New York, and Emporio Armani will dress you like a million bucks. The onsite currency exchange offers a safe place to convert cash before or after a trip abroad. When you are ready to eat, the rooftop dining deck offers a breathtaking view to pair with top-flight cuisine.

Take a break from shopping and commune with nature at the Kenneth Hahn State Recreation Area. Just ten miles from LAX, this slice of wilderness offers five miles of hiking trails for the family to stretch their legs. There is also a lotus pond for peaceful meditation, fishing, and playgrounds for kids. The stunning view at the adjacent Baldwin Hills Scenic Overview will help you forget all about how you’re going to get to LAX airport when the trip is over.

A trip to Los Angeles would not be complete without a trip to one of its many gorgeous beachfronts. With several prime beaches within easy driving distance, there is ample opportunity to catch some waves and rays. Whether you are looking for excitement or relaxation, you and your family will be sure to find it here.

The Santa Monica Pier offers an extension of the shopping fun in a beachside environment. Its iconic front entry arch is the star of screens big and small, and it is easy to get lost in a sense of wonder as you wander this 100-year-old landmark. From Pacific Park’s solar-powered Ferris wheel to the summer concerts, you will not run out of fun.

The Manhattan Beach Pier is the perfect venue to watch surfers ride the waves. Stretching over 900 feet long, the end is capped by a Mediterranean style building that houses an attraction in and of itself, the Roundhouse Marine Studies Lab & Aquarium. Free to the public, this is a great place to see sharks up close, and there are touch tanks for a real hands-on marine experience.

Close to the airport, you will find Dockweiler State Beach. While not as iconic, it can definitely provide a memorable time. Three miles of shoreline give plenty of room to enjoy the Pacific ocean, food concessions abound, and it sits directly beneath the takeoff flight path from LAX, allowing you to combine beachcombing with plane spotting. It may be the best beach to visit during a short LAX stay.

State Van Rental offers plenty of rental van options that you can accommodate both passengers and souvenirs. We offer a range of vans from 8 passenger minivans up to full sized 15 passenger vans, and cargo vans too. fifteen-passenger full-sized Our rental vans can accommodate your group, making our fleet of modern, efficient vans the perfect fit for your family vacation, youth group outing, school field trip, or business conference group. For sight – seeing, we can happily provide GPS, Hotspot Wifi, FasTrak passes and much more to optimize your Southern California experience.

State Van Rental is the premier source for your Los Angeles Van Rental needs. Located conveniently, blocks away from LAX, we are a short walk from the airport, or ask about free airport pick-up’s and drop-off’s. If you’re wondering exactly where we are located or how to get to LAX airport from our location, call us today at (424) 404-5391 or visit us online at State Van Rental to reserve your rental passenger or cargo van today.